The information in this article is based on BETA 2 of SharePoint 2010 – there will likely be differences with the RTM release.

Finally, the NDA is lifted and we can openly talk about SharePoint 2010! There’s so many cool things to talk about it’s hard to decide where to begin, but as the focus of my blog has generally been on STSADM then I suppose that’s a good place to start. The first thing we should do is load the new SharePoint 2010 Management Shell which can be found under the Microsoft SharePoint 2010 Products section of the start menu: 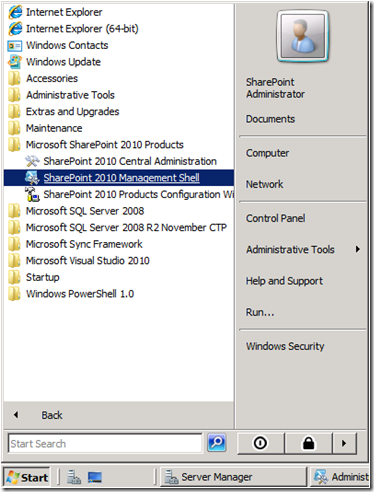 This new console window is actually just a PowerShell console which pre-loads the SharePoint PowerShell Snap-in.  You can see that by looking at the target for the shortcut:

If you look at the SharePoint.ps1 file you’ll see the following:

Note that the script is also changing the threading model of PowerShell so that commands are entered in the same thread rather than a different thread for each line of execution (I’ll cover this in more detail in a later post but it’s important to understand that this has a huge impact on how objects are disposed within PowerShell – see Zach’s post about threading here: http://sharepoint.microsoft.com/blogs/zach/Lists/Posts/Post.aspx?ID=34)

I’ll cover the PowerShell stuff in bit but first lets take a look at the STSADM changes. I did a simple stsadm -help command and saved that to a file in both my 2007 and 2010 environment and then compared those files. Here’s what I found:

From the list above you can see that the bulk of the items removed have to do with the SSP and CMS migration features which were part of the 2007 product but have been removed from the 2010 product (2010 has a whole new services architecture which is really cool, but outside the scope of this article – stay tuned! – 2010 also does not support upgrading from Microsoft CMS, you must upgrade to SharePoint 2007 and then SharePoint 2010).

Also note that very few new commands have been added – in fact I was surprised to see that any were added – why? Because PowerShell is what we should all be using – STSADM is dead – just don’t use it, forget that these new commands have been added as there are PowerShell equivalents (I wouldn’t be surprised if they get pulled come RTM). That said, at beta there may be some stuff that still only exists with STSADM but expect that not to be the case going forward.

So now that we have that out of the way, lets talk about some PowerShell (as of this post I’m officially done creating STSADM extensions – at least for 2010, I may still have need for some new stuff with the 2007 product). In your new SharePoint 4.0 Management Console type the following command: gcm -pssnapin microsoft.sharepoint.powershell | select Name, Definition | fl > .\sp2010cmdlets.txt

Take a look at the file you just generated, you now have a listing of the 535 new PowerShell cmdlets that ship with SharePoint 2010. For brevity sake I won’t show the syntax but here’s a listing of all the new cmdlets that are available:

If you’re going to be working with the SharePoint PowerShell cmdlets then there are two cmdlets that you should learn before any others: Start-SPAssignment and Stop-SPAssignment. If you’ve used the custom cmdlets that I created for the 2007 product and read my articles around them then you should be familiar with the core issue that I was trying to solve with some of them – the handling of disposable objects. When you use a cmdlet such as Get-SPSite you are returning back a disposable object, an object that implements the IDisposable interface in order to release handles to unmanaged resources which cause memory leaks if not released. I chose to solve the issue by simply not returning back disposable objects and instead using a proxy object. Microsoft chose a different route.

If you look closely at the definitions of the cmdlets from the text file you created above you should notice that every cmdlet has an -AssignmentCollection parameter which takes in an SPAssignmentCollection object type. The purpose of this collection is to store disposable objects so that they can be disposed when your operations complete. You create a new assignment collection by calling the Start-SPAssignment cmdlet. You can then optionally pass the created assignment collection object into your subsequent calls by either using the pipeline or directly setting the parameter (otherwise the global collection will be used). Lets look at the help for the cmdlet to understand this better:

If you specify the -Global switch then you do not need to store the returned object or pass it into your cmdlets – internally this cmdlet stores the object in a static variable which is used by all subsequent calls – this is the "simple assignment" method mentioned in the help text. If you do not specify the -Global switch then you must store the returned object in a variable and pass that variable into all subsequent cmdlet calls that return disposable objects and provide the variable to the Stop-SPAssignment cmdlet with the same variable via the -SemiGlobal parameter (this may change to Identity for the RTM) – this is the "advanced assignment" mentioned in the help text. So what about the "no assignment" option? The "no assignment" option is basically when you do not create an SPAssignmentCollection using the Start-SPAssignment cmdlet which causes cmdlets that return disposable objects to dispose of the object immediately after the call to WriteObject. So as long as the pipeline is active the object remains un-disposed but at the end of the pipeline the object is disposed.

So now we’ll look at the syntax for the Stop-SPAssignment cmdlet:

As you can see this is pretty straightforward, if you used the -Global switch for the Start-SPAssignment cmdlet then you’ll use it here, otherwise you would use the -SemiGlobal parameter and pass the variable you created earlier.

For the second example you can see that I’m passing in the variable using the pipeline rather than setting the parameter directly (for both the Get-SPSite cmdlet and the Stop-SPAssignment cmdlet). I could have easily set the parameter names directly but this just results in less code.

So one thing you should be asking is when do I need to do this – every cmdlet takes an SPAssignmentCollection so does that mean that I always have to deal with this stuff? My simple answer is, no, you don’t have to do this all the time, only when you know you are working with disposable objects. The problem is that most people don’t know when they are working with disposable objects, and in many cases what disposable objects are. So my first best practice recommendation for SharePoint 2010 will be to always use the simple assignment approach (use the global assignment variable) unless you specifically know to do otherwise. So wrap all your scripts with a call to Start-SPAssignment and Stop-SPAssignment. If you have functions that do not return values then wrap those using the advanced approach as shown below:

So as you can see SharePoint 2010 introduces all kinds of really cool stuff – I’ve literally not even scratched the surface with what you can do with PowerShell and SharePoint 2010, let alone all the cool new features that 2010 introduces. Over the coming weeks and months I hope to provide details on how to do a full scripted install of SharePoint 2010 including detail on how to script out every single service – this will be critical information that every administrator and developer should have as PowerShell is going to be the recommended way to start and configure your services in the new architecture.

6 thoughts on “SharePoint 2010: STSADM and PowerShell”

Copyright © 2007 – 2017 Falchion Consulting, LLC All rights reserved. Absolutely no portions of this websites content in text, images and or digital media format may be reproduced or re-transmitted in any form or media without the express written consent of Gary Lapointe.